The Blue Slipper, also known as the Masonic Shoe, is a tangible representation of a spoken act. The Blue Slipper Pin was used to identify Masonry’s Loved Ones. Giving shoes to someone else in ancient times was a way of confirming a contract.

The Shoe symbolizes a Promise

Boaz, a wealthy landowner, proposed to Ruth’s nearest kinsman to exercise his legal right by redeeming Naomi’s land and marrying her daughter-in-law, according to the Book of Ruth in the Christian Bible. The kinsman relinquished his right to purchase Boaz because he was unable to do so.

A man removed his shoe and gave it to his neighbour in ancient Israel, and this was considered a testimony in Israel. This is done in order to redeem and change. The first-degree symbol of a Covenant to be entered into is a blue slipper. As a result, the Masons’ protective power over their wives, daughters, and widows has been symbolized by the little blue slipper.

Removal of Both Shoes on Holy Ground

When we arrive in the holy land, we perform discalceation, which involves removing both shoes as a sign of respect. Joshua is tell by the angel of the Lord to take off both shoes. Because of the Holy Land, where he was standing. Before entering the holy land, an angel of God told them to stop moving and take off their shoes, according to Exodus 3, Chapter 3.

The Rite of Discalceation has always been using by Jews and other Oriental peoples. When they visit temples and other sacred locations.

Muslims who are performing devotions are required to leave their slippers at the mosque’s entrance. The ancient Peruvians left their shoes on the porch as they entered the magnificent temple dedicated to the worship of the Sun.

Pythagoras said to his disciples to do worship by removing their shoes.

People all over the ancient world believe that worshipping gods was done barefoot or without shoes. When they first set foot in the Holy Land. According to some scholars, all humans belong to the same family. According to the Bible, all nations descended from Abraham. It’s possible that scientific evidence will take longer.

According to some scholars, Discalceation originate with Moses, but it was derive from patriarchs prior to him. There is no command in Moses’ law for priests to perform temple service without shoes in the ancient Bible. However, these were old customs, and Muslims and other nations have followed suit.

The Masonic shoe, on the other hand, is another Masonic symbol. This does not come from freemasonry, but rather from the Bible. It depicts the evolution of human brotherhood through Freemasonry as a symbol.

The blue slipper resembled a sandal in ancient times. Men and women wore sandals and other types of footwear. 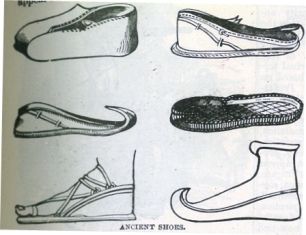 Many people are perplex by the sandal’s brown color. The name, however, is Blue Slipper. Because blue is a significant Masonic color, this is the case.